Strategic Legal Insight for Your Case 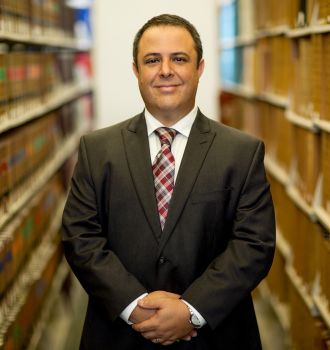 Attorney and Counselor at Law

Juan was born in Miami, Florida to parents that fled from Cuba in the late 1950’s from the tyrannical Castro regime.

Upon graduation from Florida International University, Juan attended the University of Florida College of Law, graduating in 2002. While at the University of Florida College of Law, Juan was a member of the Journal of Technology Law and Policy and also a member of the Spanish-American Law Students Association. During his time in law school, Juan was also an active participant in Toastmasters, an organization that exists in order to help an individual perfect their public speaking talents.

Upon graduating from law school, Juan lived in Chile working as a translator and negotiator for the L. Benito Guitar company in Santiago, Chile. He moved back to the United States to begin his legal career in 2005.

Juan began his legal career at the Office of the Public Defender for the 5th Judicial Circuit in Marion County, Florida (Ocala). Juan was assigned to the misdemeanor division where he had the opportunity to litigate many cases involving drugs, battery, theft and various driving-related offenses, including DUI. Many of these cases were tried to juries where Juan gained valuable experience examining and selecting jurors, examining and cross-examining friendly and government witnesses and arguing legal positions to the court.

Later that year, an opportunity to transfer to the Office of the Public Defender for the 8th Judicial Circuit in Alachua, Florida (Gainesville) presented itself and Juan took it. It wasn’t long before he was promoted to a felony division where he came to handle serious offenses involving drugs, violence and sex-related accusations. Juan even had the opportunity to be responsible for special divisions inside of the Public Defender’s office that dealt specifically with mental health and substance abuse issues. Here he had the opportunity to take many cases all the way to jury verdict, further refining his skills as a litigator.

In 2013, Juan was given the opportunity to become the managing attorney of a local boutique law firm, a position that he held for 18 months, until he decided that the time was right for him to begin his own practice.

The Law Office of Juan C. Calama was established in April of 2015 out of a perceived need to provide vigorous advocacy coupled with a desire to work very closely with clients in shaping a good defense and being personally available and accountable to them. Juan is especially happy to work with clients for whom English is not a first language and is always only a phone call away.